The latest house price data from CoreLogic has been released and it’s showing what many in the real estate industry have known for some time, that house prices are starting to climb in six out of eight of our capital cities and across many non-metro markets.

Earlier in the year, when COVID was just starting to play out we heard from the big banks who were predicting house price falls in the range of 10-30%.

As the situation in Australia began to improve and the Government responded with a range of stimulus measures to support the economy, while the RBA quickly slashed rates, it was clear that large falls in house prices were highly unlikely.

Now the tide has really started to turn and we’ve heard from a number of the major banks including Westpac and CBA who have not only reversed their predictions but are now starting to paint a strong positive picture for what might be in store for 2021.

According to CoreLogic, the extent of the price falls across the country have amounted to just 2.8%, with the bulk of the damage coming from Melbourne on the back of the second period of lockdown.

In September, dwelling values rose in Darwin, Adelaide, Brisbane, Hobart, Canberra and Perth. While house prices grew in value in all of the non-metro areas.

Sydney prices fell by just 0.3%, however, we are continuing to see resilience in the auction clearance rate which is often a bullish leading indicator.

The numbers we are seeing have been quite encouraging except for Melbourne and we continue to see strong demand from Australian Expats looking to invest in Australian real estate. The biggest issue our research has uncovered is that this demand is not being met by the current supply of new listings, especially in the higher-quality segment of these markets.

In terms of what the big banks are saying, Westpac Economists recently came out with their predictions for next year and across the board are projecting very strong growth. As credit continues to become more freely available, Westpac thinks Brisbane house prices will increase by 20% over the next two years, while Sydney prices could increase by 14% and Melbourne prices could rise by 12%. 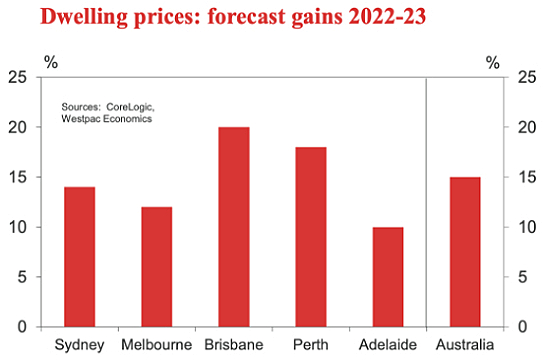 One of the biggest concerns around property prices was the ‘September cliff’, which marked the end of JobKeeper and JobSeeker payments and the winding back of mortgage holidays.

As it stands, lenders have been remaining flexible and so far there hasn’t been a sharp increase in the number of properties hitting the market. In fact, it’s quite the opposite, with listings at incredibly low levels and strong buyer demand, fueled by low-interest rates, Government incentives, improved affordability and ongoing support from a number of the regulators. It seems the banks are starting to see indications of pent up demand and they recognise that the record low-interest-rate environment will fuel a rebound in prices as the country gradually opens up.

It’s also important to remember that the banks who are making the forecasts on future property price growth also have a first-hand understanding as to the state of lending and how many borrowers are, or will be facing mortgage stress due to loss of employment. Clearly, they believe that the issues with mortgages will work their way through the system over the coming six months and the back half of 2021 should see plenty of light at the end of the tunnel.

Add to that the recent changes to responsible lending laws and for the most part, the outlook is actually starting to look very positive at the moment.

And just when we thought conditions were starting to turn the corner for the better, we have also recently heard from the RBA who is now looking a potential rate cut that could see the official cash rate fall to 0.1% down from the record low level of 0.25%.

While another rate cut is just speculation and not likely to make a material difference to home loan rates, it is also proving that rates at these record low levels are here to stay for the foreseeable future.

All this is suggesting that property prices might just be on the verge of not only not falling by any meaningful amount, but they are potentially primed to see excellent growth over the coming 24 months.

It’s also important to always remember, that Australia is not one large property market, but many thousands of smaller ones. Clearly, there is going to be the opportunity to find excellent opportunities over the next 6-12 months, but it might be prudent to start looking earlier rather than later.

Many investors are looking at perhaps having missed out on the very sharp and unexpected recovery in equity markets to go long on the other traditional growth asset class being property. It is worth noting that this seems to be focused on residential real estate as the world is still coming to terms with what the future holds for retail and office commercial property. It is worth noting that nations such as China which seems to have controlled the coronavirus spread, are showing some encouraging signs of its population returning to offices and malls in significant numbers.

Australia’s international travel bans are now tipped to remain in place until late 2021, apart from bilateral green lane agreements with self-contained nations such as New Zealand, Singapore, Japan and Taiwan as these each bring the pandemic under control. Hence, we should also consider the impact of this potentially localised international travel and the surge in domestic travel as the state and territory borders continue to reopen, on the various property markets around Australia.