Given the significant impact, low rates have had on stoking the property market, it has many people asking, how will any rate rises change that dynamic going forward?

Firstly, it’s important to note that the RBA didn’t bring rate rises forward. Their wording did change from the prior month, where they suggested there would be interest rate rises ‘in 2024 at the earliest’, to simply naming 2024 as when rates would likely rise. However, they could be raised earlier. They did also cut back with the rate of QE by $1 billion per week, which was also a positive for the Aussie dollar although this has not had any impact on the current AUD cross rates.

At this stage, there does appear to be an ever-so-slight shift in the RBA’s outlook, however, it doesn’t mean that this has changed sentiment all that much just yet or that it will drastically impact retail borrowers.

Notably, we have already started to see some of the fixed-rate products start to rise from the major lenders. This has already been happening over the past few weeks. Once again the moves have been very modest. What we also are starting to see is some of the super-low introductory offers that had rates under 2.0% now rising above that level.

Even though there has been a focus on rates rising, both in the US and locally, it’s still important to consider the fact that by historical standards we are still seeing the lowest interest rates on record. A small change of even 20 basis points on some of these loan products is unlikely to slow things down and for many, it’s not worth factoring in just yet.

We are still seeing the majority of new loans coming from owner-occupiers and that is even with a sharp fall in the first home buyer market. Of which many, were simply buying on the back of a host of Government-fueled incentives.

In terms of where the property market is sitting, the upper end of the market remains very strong. We are seeing a clear lack of stock and demand still as high as ever.

There has been some weakness, but so far that has really been at the lower end of the market and again much of the demand was likely from the first home buyer segment which has clearly cooled off due to much of it being brought forward by Government stimulus incentives.

The latest data from CoreLogic suggests that the Australian residential property market across the country finished the financial year 13.5% higher, which is very strong by anyone’s standards.

Notably, Sydney continues to lead the way with the upper end of the market being very strong still. We can see that over the past 12 months, houses in Sydney grew in value by 19.3%, compared to units which only gained 5.1%. In Brisbane, house prices rose 14.8% and also outpaced units by nearly three to one ratio. 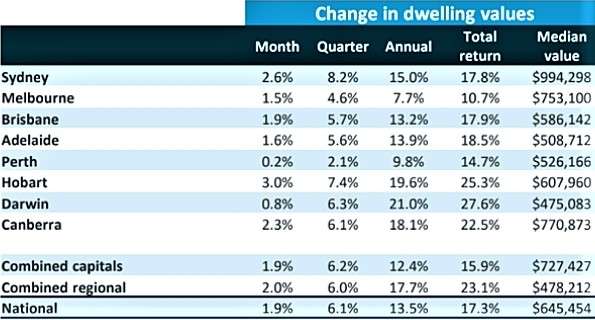 Overall, it appears that house prices are still very much on an upward trajectory and that’s certainly the case for the premium end of the market.

While the RBA may have signalled that rates might rise earlier than previously suggested, we must remember that today’s interest rates are still virtually the lowest we’ve ever seen and possibly likely to ever see again in a lifetime.

If you were to be told you would be paying 2.0% interest, only three years ago, you would have jumped at that opportunity in a heartbeat.

Despite some rates creeping higher, any large increases are going to be very slow and very measured and by the RBA’s own admission – well telegraphed. For the time being, the outlook for most of the Australian residential property markets remains very positive. It is worth noting the importance of doing your research properly if you are a prospective property investor rather than a home buyer as the divergence in some of Australia’s capital cities and major regional markets has widened over the past year.