The latest set of figures from CoreLogic has confirmed what most homebuyers already know, which is that house prices are rising at a record pace.

In March, house prices increased in value by 2.8% across Australia, which is the fastest rate we’ve seen since October 1988.

Spurred on by record-low interest rates and a host of Government incentives such as HomeBuilder, growth is back at levels not seen since the last property boom in 2015-2017.

After a slight dip in 2020, house prices in Sydney, Melbourne and Brisbane have all gained ground this year and are now on track for growth seemingly above 20% per annum.

March saw dwelling values in Melbourne and Brisbane increase by 2.4%, while Sydney continues to lead the way, increasing by a staggering 3.7%. If you break down the data even further, it was house (detached homes) prices in Sydney that actually increased 4.3% showing just where most of the buying interest is currently focused. The top end of the market in our three largest cities continues to be where most of the demand is at the moment and CoreLogic noted that ‘the upper quartile of the market recorded a 3.7% lift in values in March, while the lower quartile was up less than half this rate at 1.6%’.

We need to be cognizant of all the data to make rational decisions about buying a new home, as the Sydney and Melbourne markets have only just now surpassed their previous highs from 2017, so there has been very little price growth overall and I am certain that this is also giving some comfort to the RBA. 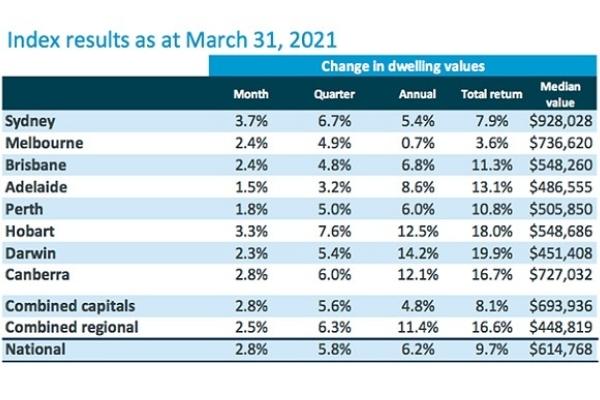 One of the other key reasons for the strong growth in house prices across the country is the continued lack of supply. Listings remain at levels not seen in years, with just 150,000 properties for sale across the country. The five-year average is approximately 220,000 for this time of year. A significant amount of the new supply in detached houses is located in the growth corridors around the capital cities, so the shortage of stock in the inner-middle ring is not being expanded due to no new land supply being available. New apartment supply continues to remain depressed, especially in these sought-after locations that are favoured by the owner-occupier “right-sizer” segment that wants high-quality oversized dwellings providing good levels of amenity and security. 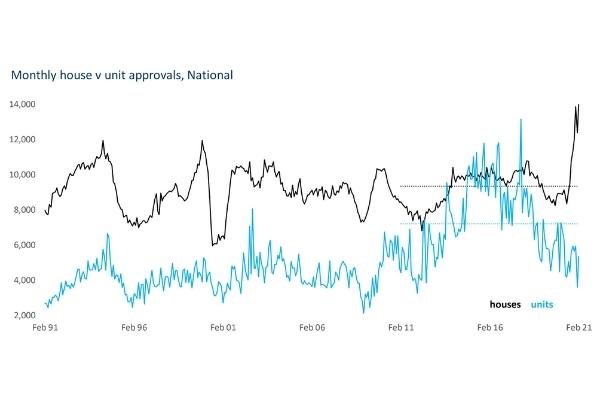 What Is Going To Slow The Market Down?

While the housing market is back setting new highs for most capital cities, CoreLogic also noted that there are a few factors that we need to look out for. However, just what sort of impact they might have is still debatable.

The last time house prices started to move at this sort of speed, it was APRA that decided to put the brakes on by introducing tighter lending standards. In particular, they focused on increasing the serviceability barrier that would be applied to those seeking finance.

What’s important to note here is that even though interest rates have fallen to a record low level and the RBA suggests things will stay that way until 2024, lending standards are still very high.

While it’s possible to get a home loan with an interest rate under 2%, assessment rates are still around 5%. From the perspective of the lenders, they haven’t really relaxed their lending standards at all.

In terms of affordability, with interest rates falling so dramatically, the ability to service debt, even at higher prices remains more manageable than ever before.

Looking at an example, only a few years ago if you were paying 5% on a $1.5 million home loan you would be paying interest of approximately $6,250 per month. At a 3% interest rate, you could theoretically afford a $2.5 million loan at a similar repayment level. House prices could see that extra 50% plus increase and the level of affordability still remains the same. Given that over 25% of new borrowers are opting for ultra-low 2 and 3-year fixed rates, the outcome is that it is now more affordable than ever to service debt. This could well lead to unsustainable price growth, but the Australian banks have a large serviceability buffer in their servicing calculators so the ability to obtain credit is managed very prudently at this stage, as APRA has now stated on a number of occasions.

At the same time, the house price growth that we’ve been witness in the last six months isn’t as high as in other countries. In fact, Australia is lagging both New Zealand and the US and most developed economies in terms of growth during the pandemic. 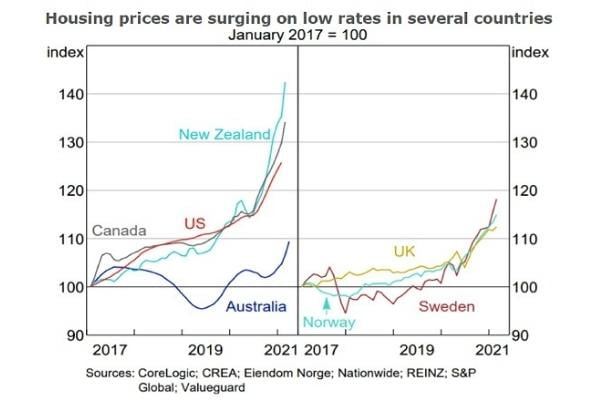 As central banks continue to print money, the main risk is not rising house prices, but rather being left behind by doing nothing if one is fortunate enough to have stable employment and perhaps an excess of cash which is providing virtually no income. The main factor that could slow things down would be higher interest rates and the RBA has made it clear that won’t be happening in the next 2-3 years even though financial markets are still pricing in a move much sooner.

Confidence has clearly returned to the housing market and that is often a precursor to economic growth in Australia. You might be better off lowering your expectations in the short term and getting into the market at a level that is comfortably affordable, rather than sitting on your hands and waiting for something that may not happen.

Historically, those who have waited for house prices to crash after a big run-up in prices have not faired too well and have largely missed the boat. If you look to buy quality assets in good locations, you’ll likely find your investment will hold up throughout most market cycles. However, in the short term, it’s fair to assume there will be more growth ahead and procrastination may well prove very costly. The media always likes to speculate about property price bubbles, but the current market movements are driven by owner-occupiers so I do not believe that this is a speculative event driven by “investors” and loose lending policies which would need to be present to produce price bubbles. The next phase of this market would likely see the return of more property investors as the search for growth assets providing a better yield continues

It is a difficult buyers’ market at present although the data suggests that this will become even more so over the ensuing months ahead. It is always important to do your research, and perhaps now more than ever. After a period where we’ve seen some of the lowest interest rates in history, investors are now starting to take a closer look at what rising bond yields are telling us. Over the past few months, the yield on both US and Australian Government bonds has been rising sharply. As it stands the yield on…